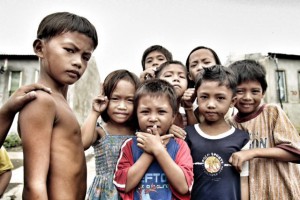 In 1995 , Aurora Roiland Prudent creates the association Les Oursins* – Enfants des trottoirs that promotes any form of prevention, information , awareness for the protection of children , including victims of child prostitution and pedophilia. Aurore Prudent-Roiland has observed boredom among street children. Lack of financial and human resources of associations do not favor animation as a means of action. Les Oursins* – Enfants des trottoirs strives to reverse the tendency by maximizing the mode of expression for children who will now have the choice of game. Thus, the first games library in the world for street children and slum children opened in Manila in April 2000. Over the years, the work of Les Oursins* keeps widening more and more! The association takes place in the provinces and in Manila itself, helping street children and slum boys in prison, children of scattered tribes, … Today, Les Oursins are involved in Calamba, Philippines via the structure of Delépine Inc , with more than 10,000 people , mostly relocated from their slum of Manila, to clean up the capital and to develop housing complexes and roads and also relocated in the barracks of Southville, Calamba. These relocations are not social, medical nor educational . Families that have very limited access to water and electricity have been uprooted from all their bearings and are faced with very few job opportunities. In Southville, Calamba, boredom, despair and crime threaten these uprooted families . Thus, Les Oursins are working to improve the construction of socio- medical and educational infrastructures to help them. In addition, our association has plans to open a games library in Southville , Calamba to provide a play area for children and enable them to live real moments of childhood! The actions are diverse but the goal remains the same : to act with these children left behind in protecting their right to childhood !